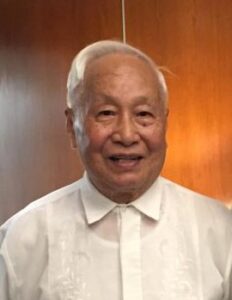 Daniel Chow was born on February 18, 1926 in He Ping, Guangdong, China into a Christian family. His father was a pastor of the Tsung Tsin Church, and his mother was a primary school teacher. He had three brothers and three sisters.

Daniel entered the Lok Yuk Theological Seminary in Meixian, Guangdong, China after he graduated from high school. He continued to study theology at various intervals in Hong Kong, Geneva, Edinburgh, Boston and Pittsburgh, and received his Doctor of Theology from the South East Asia Graduate School of Theology.

Daniel was ordained by the Tsung Tsin Mission of Hong Kong in 1959. He served as a pastor of Fanling Tsung Tsin Church in Hong Kong for three years, and as a pastor of the Presbyterian Church USA for seven years. He also taught as a Lecturer in New Testament at Lok Yuk Theological Seminary (Sai Kung, Hong Kong), and in the Theology Division of Chung Chi College of the Chinese University of Hong Kong for twenty-six years. After his retirement, he continued to teach New Testament courses in several seminaries in Hong Kong, Singapore, Guangdong and Sabah, Malaysia. From 1978 to 1998 he also served as the District Pastor of the Tsung Tsin Mission of Hong Kong.

Besides teaching, Daniel authored thirteen books in Chinese and translated more than twenty Christian books from English into Chinese.

Daniel and his wife lived in Quincy, Massachusetts after their retirement. During his last years, Daniel was often invited to preach on Sundays by the local Chinese churches. Daniel and Nancy very much enjoyed the fellowship with the sisters and brothers in Christ there.

May all the glory and praise be unto God!

This website uses cookies to improve your experience while you navigate through the website. Out of these cookies, the cookies that are categorized as necessary are stored on your browser as they are essential for the working of basic functionalities of the website. We also use third-party cookies that help us analyze and understand how you use this website. These cookies will be stored in your browser only with your consent. You also have the option to opt-out of these cookies. But opting out of some of these cookies may have an effect on your browsing experience.
Necessary Always Enabled
Necessary cookies are absolutely essential for the website to function properly. This category only includes cookies that ensures basic functionalities and security features of the website. These cookies do not store any personal information.
Non-necessary
Any cookies that may not be particularly necessary for the website to function and is used specifically to collect user personal data via analytics, ads, other embedded contents are termed as non-necessary cookies. It is mandatory to procure user consent prior to running these cookies on your website.
SAVE & ACCEPT
Copy Protected by Chetan's WP-Copyprotect.